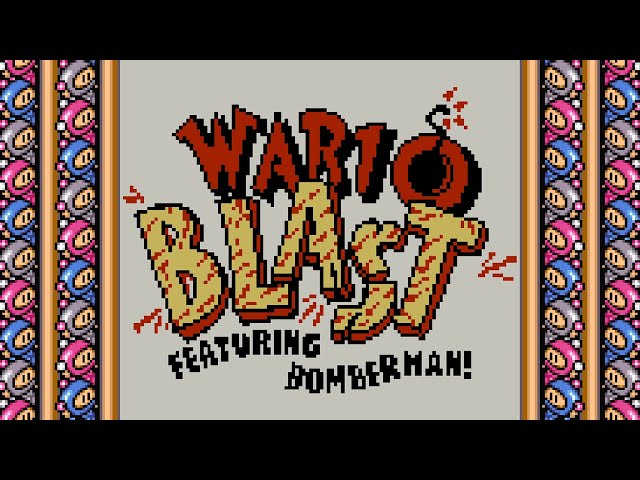 Summary: Help Wario (or Bomberman) destroy the opponent as you go through a series of stages and bosses, while collecting power-ups to aid with your battle.

This was one of my favorite games from when I was a child. I played it so many times, and had so much fun. I played it on the original Game Boy, which everything was black and white. I remember having such difficulty with the final boss. I played as both characters back then, but preferred Wario.

This game is also known as Bomberman GB in Japan (not to be confused with the version released in the US). It was pretty much the same game, but without Wario.

During my playthrough, I played using the Super Game Boy, which is a cartridge that allows you to play Game Boy games on the SNES. The only reason I did this is because the Super Game Boy version has a nice color pallet and actually enhances the bomb explosion sound.

I first experimented playing the game using the Game Boy emulator, SameBoy, with Super Game Boy enabled. However, this didn’t work too well since the enhanced sound effects didn’t play. I realized I had to actually use a SNES emulator with a Super Game Boy rom to load the Game Boy rom of the game. Complex, but. worked. The emulator I used was bsnes-hd within RetroArch.

However, there initially was a problem, which was that. the game was running fast. According to resources, the Super Game Boy runs 2.4% faster due to clock speed differences between the Game Boy and the SNES. This, however, was remedied with the Super Game Boy 2, which was only released in Japan. Now I could have the enhanced sounds and border, but retain the original speed of the game.

The story is not obvious in the game, but according to the booklet:

WARIO INVADES THE LAND OF THE MADBOMBERS!

Wario, in his constant search for new lands to conquer and treasures to gain, has found the extra-dimensional portal that links his world with the one that Bomberman inhabits. Thinking that the Madbombers will make a nice addition to his legions of mindless minions (as well as a new source of funs for his nefarious schemes), Wario steps through the gate… and soon finds that the Madbombers are not quite the dim-witted flunkies he originally thought them to be!

Control either Wario or Bomberman and fight your opponent with bombs. At the start of each match, you can place one bomb and it has limited range. However, there are upgrades that enhance the range and give you more capacity. There is even a skull that can power you down in multiple ways, and is contagious if you touch another character.

Each stage consists of four levels, 1 vs. 1, 1 vs. 2, 1 vs. 3, and the boss. The more enemies there are, the smaller the arena. After defeating the boss, you unlock a permanent power-up. These include Kick, Dashin, the Trouncer, Liner, and Moto. Each one makes it easier to defeat the enemy.

When played on a Super Game Boy, a “Battle” mode for multi-play is accessible on the start screen.

Since this is on the original Game Boy, everything is black and white. However, when played on the Super Game Boy, there is some color that matches the characters quite well, and also has a nice border around the game. Wario looks a bit strange…almost as if he has fly eyes. 🪰

I like the music in this game, especially the boss theme and several of the level themes. There are some interesting sound effects as well, like the teleporter sound in stage 2. I like that one. When played on a Super Game Boy, the bomb explosion sound effect is higher quality.