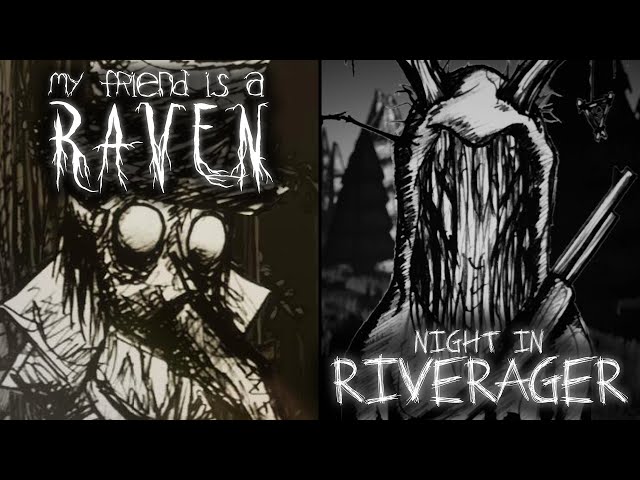 Summary: This collection includes My Friend is a Raven, Night in Riverager, Cloud Climber, and No-Snake Hotel.

This is a collection of several games by Two Star Games. These are all free and include My Friend is a Raven, Night in Riverager, Cloud Climber, and No-Snake Hotel. Night in Riverager connects to another game from the same developer, My Beautiful Paper Smile, which is not free.

A friend suggested My Friend is a Raven to me, and I really loved the art style, so I decided to play a collection from the developer.

My Friend is a Raven

Story: Lutum is the last man alive after a devastating plague. He returns to his apartment to find the raven, for answers as to why he spread a disease across mankind and wiped them out.

There are four endings:

Bad Ending (Extinction) – Get just the seeds and the raven gets mad and killed Lutumn, saying he has no heart to help another being.

Good Ending (Friends) – Get the seeds and the rat and the raven is kind to Lutum, even saying he looks like a raven himself. The raven flies off, and next to it is another one.

Passive Ending (Unforgiven) – Get the seeds and set the clock to 12:00. With the passage of time, or rather more like a flashback or what is occurring now, the raven asks for help, but Lutum said he wants nothing to do with him. Back in real time, the raven said Lutum rejected his plea for help, but Lutum tries to beg for his forgiveness. The raven flies off, leaving Lutum to lay on the couch to die.

Aggressive Ending (Venomous) – Get the seeds, dead rat, needle, and ink to poison the dead rat and give it to the raven. The raven realizes that Lutum has poisoned him, saying that he’s surprised he isn’t more sympathetic to a creature when humans have been mostly wiped out due to the plague. The raven flies off to die to not give Lutum the pleasure of seeing his death.

Gameplay: This is a simple point and click in a small apartment. Simply move left and right, picking up a few key items to progress. There is limited inventory, and items are used (or combined) automatically.

Graphics: The game is entirely black and white, but with a hint of yellow, and red for the disturbing scenes. It’s an amazing style that looks creepy.

Sound / Music: There is some quiet ambients in the background, but not much else.

Story: Lasciva is considered a hunter, a hooded and mysterious figure who must venture out to find medicine for his mother. He must venture into the King’s domain where dangerous unnatural forces are at play. Upon getting to a cabin, he is visited by a creature that hunts him. This creature teleports and is glitchy. Lasciva, or perhaps the dangerous entity that assumed his form, either by killing him, or passing along the glitch to him, is seen outside the cabin, while someone else enters it. This story continues in My Beautiful Paper Smile.

Gameplay: Walk around in a 3D environment, solving some puzzles to progress. There is a chase sequence towards the end. There is an inventory in the game, but it is never used.

Graphics: The game is completely black and white which looks incredibly dark and scary. It is definitely a unique style.

Sound / Music: There is an ominous hum that plays thought the entire game. It really brings out the creepy atmosphere.

Story: There are several large towers that extend into the clouds, built by people who needed water to survive. It never rained on their planet, resulting in hundreds of years worth of effort to extract some water from the clouds. Everyone else has died, leaving only one person left. There are notes scattered about in the towers of the people that have passed away. As the character makes it to the fourth tower, they know they must build to the clouds to survive. However, reality sets in as they realize there is no point. They take a break and just when they do, it beings to rain.

Gameplay: Walk around the towers, climbing up them, and moving to others while looking for notes of people who have passed away.

Graphics: Large towers extended from a void below, which look like clouds, but are just dust storms. The colors are a bit sepia tone as well.

Sound / Music: There is minor ambients in the background. There is also some voice acting from the developer.

Story: There are absolutely no snakes in this hotel. In fact, there is even a 99.99% no-snake guarantee. What could go wrong? As you get closer to your room, a trail of blood is on the ground, followed by a small snake. Make another turn and a big one approaches that eats you whole.

Gameplay: This is a very simple and short game. Simple move around the hotel halls, looking for your room, reading a few funny notes from people who have had issues with snakes in the past. On the way to the room though, what’s that…a small snake? Followed by a large snake? Try to run, but it’ll eat you anyway.

Graphics: The beautiful halls and lighting of the hotel. Not to mention great scales on the snake. It’s actually a good looking game with just the right amount of tension and darkness to make it scary and funny.

Sound / Music: Such nice elevator music, but as you get closer to your room, the tension builds and the music starts to get darker.