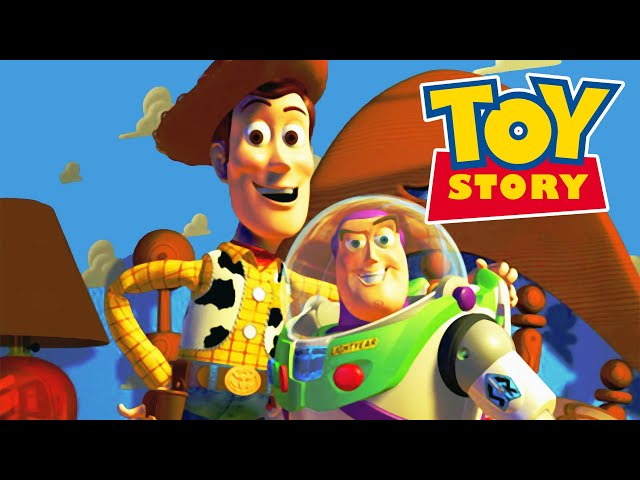 Summary: Andy's favorite toy, Woody, has some competition with his new favorite toy he got for his birthday, Buzz Lightyear.

Based off the Disney movie, Toy Story is a Sega Genesis game that I enjoyed as a kid, but could never complete. It was far too difficult. I could never get past the “Battle of the Mutant Toys” stage since I couldn’t combat the mutant toys at the end of the stage. It was nice to finally complete it, though still not a great game.

There is a SNES and PC version that are considered to be superior to the Genesis version.

The story is exactly like the movie. Toy come to life when humans are not around, and Woody, a cowboy toy, is Andy’s favorite. However, it’s Andy’s birthday and he gets a new toy, Buzz Lightyear which replaces Woody. After a confrontation, Woody ends up knocking Buzz out the window using RC car. The rest of the toys are upset and angry with Woody.

Andy ends up going to Pizza Planet, but has to take Woody since Buzz is nowhere to be found. However, Buzz ends. up getting into thee car and having a confrontation with Woody. They fight and end up falling out of the car, having to make it to Pizza Planet on their own, but get stuck in the claw machine where a bully named Sid captures and tortures them. Andy is about to move, and Woody and Buzz must escape from Sid in order to go with Andy. They escape and manage to make it into the moving car shorty after Andy leaves.

This is a side scrolling platform game. Woody travels to different areas with different objectives. For the most part, making jumps is not difficult, but avoiding obstacles and enemies is. Woody has a lasso attack that doesn’t defeat enemies, but coils them up to prevent them from moving for a short period of time. There are other platforms of gaming, such as riding on Rex and RollerBob, and driving RC car which are the worst levels since the controls suck.

The game is challenging and unforgiving. One of the worst parts is the claw machine boss, which can quickly result in a game over if you don’t know what to do. I’ve lost many times on this boss, and the few levels following it. That’s pretty much where my game would normally end.

Graphics are not the greatest for a Sega Genesis game. Colors are relatively dark, and nothing is really all that clear. The levels, however, are quite detailed and a lot is going on in them including the background.

The game uses music from the movie but in a Genesis format. You will hear some of the classics from the movie. Despite it being familiar, the music isn’t the greatest in the game because it sounds like it wasn’t done natively on the genesis. The voices in the game are also of poor quality due to the limitations of the system.