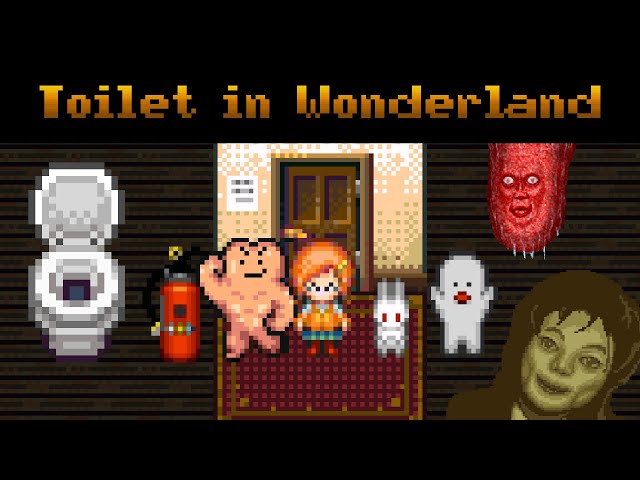 Summary: Mira is constipated and must travel to a toilet wonderland full of wacky characters. Can she get enough laxatives to defeat her constipation?

This is a short hilarious game all about constipation and toilets. I’m not sure where I first heard of this game, possibly Vinesauce. I loved the concept and hilarious story and characters.

The game is made using the RPG Maker 2000 game engine, and was originally in Japanese, but was later translated to English by Memories of Fear on January 8th, 2014. The English version can be downloaded from the translation website.

A constipated girl named Mira explores a wonderland full of toilets and wacky characters, such as Mario and MJ (Michael Jackson). MJ actually helps Mira and believes in her and being able to relieve her constipation. Mira also meets friends who join her on the journey of defeating her constipation: Bottom, Horizon, ??? [NAMELESS] (create the name for this character), and Fire Extinguisher.

There is also a side story regarding Mira’s father, and the father of a lonely doctor who wanted to be a doctor, but his dad (which is also Mira’s dad) stopped him and killed all his friends.

There are three endings. Collecting artifacts and laxatives along the journey will change the ending. There is an overall quest, called “a speckless odyssey” where the two key elements are constipation rate and items collected.

This is an adventure game where you travel to different toilet worlds from a main hub world. With each world completed, a toilet appears in the main hub world. There are also laxatives that must be collected to get to get the constipation rate down. Addition, artifacts from the past can be found in each world. Depending on the number of artifacts and laxatives collected will determine the ending.

There are various music tracks from other games, such as Phantasy Star Online. There are some hilarious sound clips and songs too. “Mario Has Logged In.”