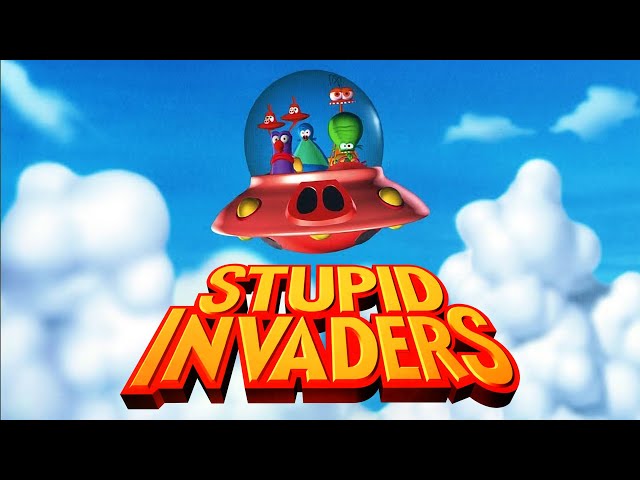 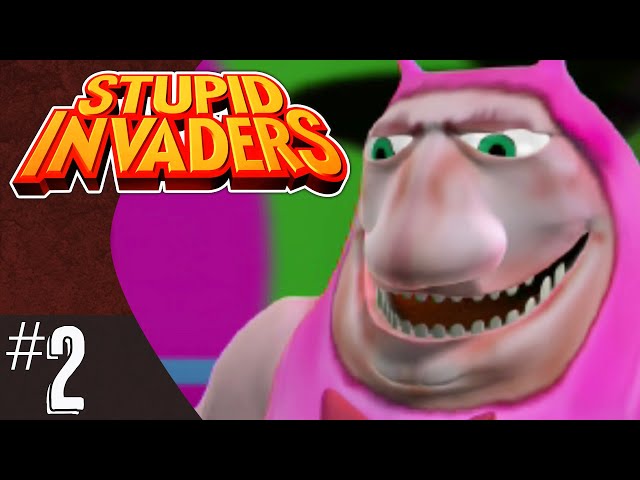 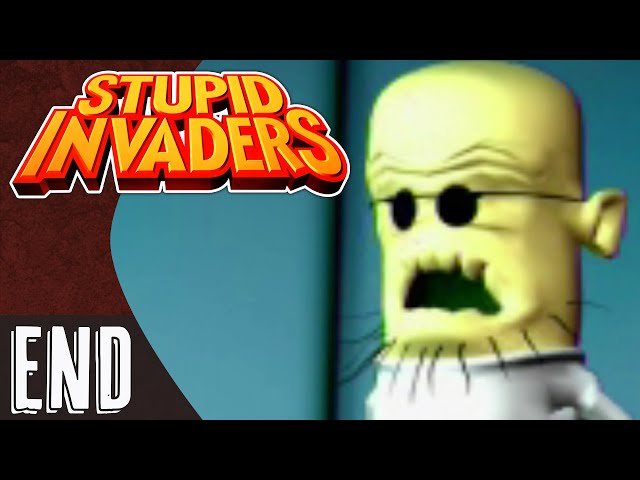 Summary: Stupid Invaders features five aliens that have crash landed on Earth and are looking for a way back home. But, evil scientist Dr. Saccharin has different plans for them.

This game is based off the French animated cartoon show, Space Goofs. I never saw the show, but I owned the game on the Dreamcast. It was actually one of the first games I owned on the system. I never completed it because the puzzles were too difficult for me, but now they are relatively easy.

I had a picture of Santa Claus in the game as my wallpaper on my PC and PSP for the longest time. It was just too amazing.

There is also a PC version of the game, which is superior, but I couldn’t get it to work. I tried many options, compatibility, and other things but couldn’t get the cutscenes to play without freezing, Randomly (and occasionally) the cutscenes would freeze and the last five seconds of the audio will play on repeat as the game hangs and never progresses. I found no solution to this, so I decided to just play the Dreamcast version which doesn’t have this problem. However, the graphics are inferior and the cutscenes (and there are many) don’t look good.

Another difference between the PC and Dreamcast version is the framerate. The PC version runs at 25fps, while the cutscenes run at 12fps. Dreamcast runs at 60fps, but with lower frame rate animations. However, the cutscenes run at 24fps, making it look so much smoother. The audio also appears to be slightly inferior on Dreamcast. It is a higher sample rate, but is lacking some clarity compared to the PC version.

Since I had to play it on the Dreamcast, I used the emulator, Flycast. There were practically no issues besides the credits. I also displayed the VMU in the upper left corner. I opted for the standalone version of Flycast as opposed to the RetroArch version since I could have the VMU display outside the 4:3 game display area.

The names of the characters appear to be misspelled in the manual when coming it to the official spelling in the television series.

Five stupid aliens crash land on Earth and have to find a way to repair their spaceship and make it back to their planet. Years go by and Dr. Saccharin hires a bounty hunter, Bolok, to capture them and bring back the spaceship. Bolok enters the house and hunts down the aliens, freezing them all except Bud Budiovitch, the dumbest alien of the bunch. Bud has to find a way to avoid Bolok and free his friends. He is successful and Etno Polino grabs his life’s work, the study of humans and their behavior, and fixes the ship and they all head home…well…

They end up crash landing in another area, the Dung Factory. The aliens need enough cow dung to fuel their ship to finally get home. Gorgious Klatoo and Candy Caramella set out to get the dung. Candy ends up getting captured by a creepy man named Nelson who snaps photos and sleeps with Candy. Meanwhile, Gorgious is is successful in finding a cow. When Gorgious and Candy meet up, they gather cow dung to power their space ship.

However, Bolok makes a return and forces them to go back to Area 52 where Saccharin captures them and tries to kill Bolok who requests the other half of the money he was promised. Stereo Monovici manages to escape and must now free his friends.

After man obstacles and puzzles, the aliens go into separate escape chambers, except Bud which was in the desert and went down through the top to save his friends. He manages to find the room where the others are, releases them, and heads back to the ship. However, another alien creature steals the spacecraft, leaving them stranded.

This is a point and click game. Hover your cursor over items to pick them up, combine items, and solve puzzles with the items you picked up. Some items can be interacted with and picked up. This may cause some confusion since a dedicated button changes the cursor to pick up the item (I’m looking at you mousetrap). Be careful where you go and what you do as you could end up dying. That’s why it’s important to save frequently. Saving can be done at any time.

The colors are rich and the game looks amazing. I really like how colorful and unique it looks, well mostly the first area. Past that it turns pretty dark and not as visually appealing. All the graphics are basically just images and the character moves on the image in a direction to get to the other parts of the room. The objects you can interact with somewhat stick out, but it’s not overly noticeable. However, it’s not buried either.

I love the music in the game. Most the tracks are very short and loop, which often is not seamless. The seam is worse on the Dreamcast version and it very noticeable where the song loops. Practically each room has a different tune, all of which is about 15 seconds. The sound design is also quite good. And the voices, those are the best since what the aliens say are absolutely hilarious. They say some crazy stuff.