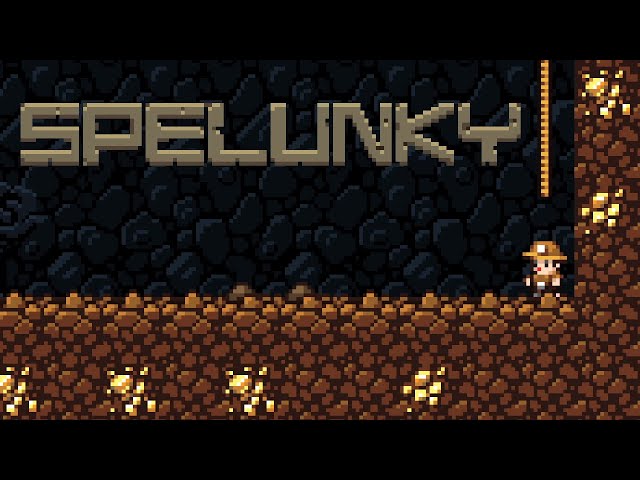 Summary: An adventurer explores a cave and finds treasures, enemies, and traps.

A classic game of exploring a cave, dying endlessly, and restarting your adventure. While I didn’t play this version as much as the HD remake, I still enjoyed my time with it. The game is free and can be downloaded on the official website.

There are various mods available for the game since the code is open source. One I tried out is the HD mod which adds widescreen. It’s available from yancharkin on itch.io.

An explorer discovers a cave that goes deep underground. Inside this cave are treasures, enemies, and traps. He goes deeper and deeper to find what awaits him at the bottom. He is first greeted with a standard cave area, but going down deep enough he finds a jungle. Going down even further he discovers ice caves, followed by a temple. If he has collected golden artifacts – Udjat Eye, Ankh, Hedjet, and Scepter – he finds the City of Gold in the temple, filled with tons of riches. Going even deeper, cavemen are worshipping an ancient totem known as Olmec who awakens and tries to kill the adventurer. If the adventurer can defeat Olmec by making him fall into the lava pit, he is awarded with a giant golden idol.

This is a randomly generated game, a roguelike, where each time the adventurer dies, it’s game over and a new adventure begins with a different layout, different enemy and item placement, and many other things. Sometimes you will get seeds that are good, other times you won’t find items and will have a hard time.

Your character starts with four health, but there is a female damsel on each level that the adventurer can save and take to the exit to get extra health. Furthermore, there are altars of Kali that living things can be sacrificed on to obtain the Kapala to get even more health. However, if he destroys the alter, making Kali mad, he may be faced with a ball and chain that will significantly slow down his movements.

Shops are available to purchase various items, but when stealing or killing the shopkeeper, he will be after you on future levels.

If the adventurer spends more than 2:30 on a level, a ghost will appear that cannot be killed. The adventurer will have to avoid him and make it to the exit.

This version is a lot like the HD remake, but there are some differences. Besides graphics and audio, a few controls are different, making it a bit more inconvenient to purchase items from shops, open crates, whip enemies, etc. Whipping enemies and items, moving it, isn’t really a thing in this game. The hitbox is very small, making taking damage quite easy.

There are various ways of maneuvering, including ropes and bombs. There is limited stock, so use them wisely. However, they can be found in boxes and purchased in shops. There are also various upgrades such as:

This game is intended to look old with nice crisp 8-bit pixels. However, it is quite dark and not too colorful of a game. Due to the muted color pallet, it can be hard to spot certain enemies and traps, which is likely intentional to make it harder to have a successful run.

The music sounds 8-bit like an older game. It fits with the graphics, and can be quite catchy. The sound effects are also 8-bit. The damsel will yell ‘help,’ but you don’t actually hear it, instead it’s replaced by a sound effect. There is no soundtrack available for this version of the game.