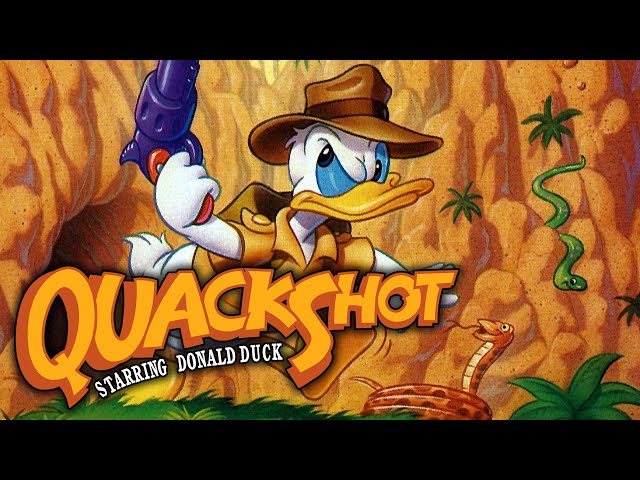 Summary: QuackShot is a platformer starring Donald Duck and his search for King Garuzi's most prized treasure.

This is a game I never played before, but it was requested by a subscriber on Twitch. At the time, it was the oldest game I played. It was quite difficult and I needed to use save states and cheats like infinite lives. I don’t think I could’ve gotten through it without those.

Donald Duck was flipping through Scrooge McDuck’s books and find a map that leads to King Garuzia’s treasure. He sets out on an adventure, traveling the world to find the treasure, but Big Bad Pete wants to take the treasure for his own.

Donald travels through various countries, looking. for clues and ways to find the treasure. These locations include Duckburg, Mexico, Transylvania, Maharajah, Egypt, South Pole, and Viking Ship. Donald finds the Viking Diary which revels the true location of the treasure, but Big Bad Pete takes it. Donald then has to go to Pete’s Hideout, defeat him, and reclaim the map. After that, he discovers the true location of the treasure, which is on the Great Duck Treasure Island.

Donald heads to the treasure island and defeats the guard that blocks the treasure. But, the treasure turns out to just be a stone statue. He still takes it, but back home it breaks, and inside reveals a golden necklace which he gives to Daisy Duck.

This is a platform game where you control Donald Duck. He has various attacks, including plungers, popcorn, and bubblegum. Plungers will only stun enemies, but popcorn and bubblegum will destroy them. There are three types of plungers, the yellow one that only stuns enemies, the red one that sticks to walls and can be jumped on to get to higher places, and the green one that can be stuck to birds to fly across gaps. The popcorn shooter is a spread shot with very limited ammo, while the bubblegum shooter can be used to destroy blocks.

There are a various health items, such as ice cream and roasted duck, that will heal Donald. There are also red-hot chili peppers that eating five of them will give Donald a Quack Attack. They are only in maybe two levels and makes him run really fast and is also invincible during that time.

There are a handful of bosses, including Count Dracula in Transylvania, a tiger in Maharajah, Viking Ghost in the Viking Ship, Big Bad Pete in his hideout, and the Guardian of the Duck Treasure on the Great Duck Treasure Island. Most bosses are not too difficult, except the last one which I had a really difficult time with.

The overall game is extremely difficult. I had to use save states and cheat codes just to get by. I would not have been able to do it without the cheat codes.

The pixels are crisp and ducky. 🦆 The graphics, characters, and environments all look great. Colors aren’t too bright or washed out. An overall good looking game for the time.

The music is catchy and sounds great. It does not get repetitive. The volume of the music seems really loud since there are sounds that stand out and are perceived as being loud. There is no soundtrack available for the game.