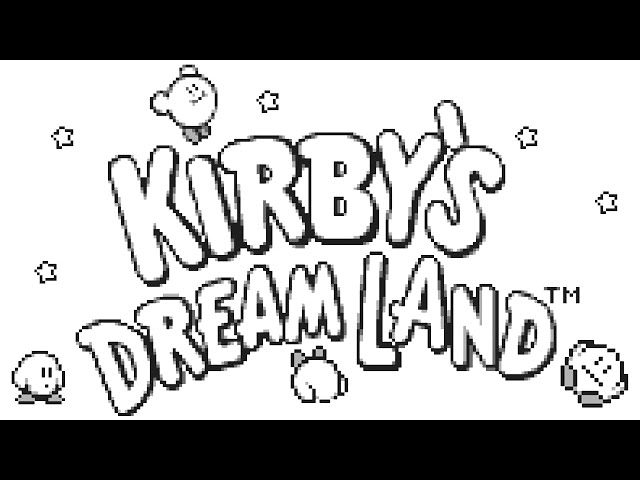 Summary: Kirby's Dream Land is the first game in the Kirby series. Kirby must stop King Dedede and his minions who have stolen the Dream Landers' food.

This was one of my first games ever, on the original black and white Game Boy. I beat it more times than I can count. It’s interesting since I didn’t play a game past the first one.

The story is not clear in the game if you don’t have the manual, which states:

On a tiny star somewhere far, far away from earth, there is a very special place known as Dream Land. The Dream Landers are very happy people who use their magical Sparkling Stars to play and work among the heavens. That is until one dark night when the gluttonous King Dedede and his rotten band of thieves swooped down from neighboring Mt. Dedede for a midnight snack in Dream Land. Not only did they steal all their food, but they stole the Dream Landers’ treasured Sparkling Stars as well.

Because the Dream Landers didn’t have the Sparkling Stars to gather food anymore, they began to get very hungry. Suddenly a spry little boy named Kirby happened along and said, “Don’t worry, I’ll get your food and your Sparkling Stars back!”. With these words, Kirby set off on his quest toward the dreaded Mt. Dedede. We wish him luck!

As Kirby goes through his adventure, he goes through various worlds to get to King Dedede to take back the food.

Kirby has two basic actions, jump and suck up enemies. Since this is the first Kirby game, there is no copy ability, thus he can either spit out the enemies to harm others and bosses, or swallow them whole.

For the most part, the game is relatively easy and can be completely quickly. However, after completing the game, a special mode becomes unlocked, “Extra Game,” which is essentially the hard mode of the game, which greatly increases the difficulty. There are new enemies, and more of them, and the bosses have new mechanics.

Since this game is on the original Game Boy, it’s black and white. You can play with color on other systems such as the Game Boy color, but since the original never had color, it’s only adding an assumed color pallet.

It’s also interesting to mention that Kirby’s original color was white, not pink. Thus playing the game in color should not render Kirby as pink as it would be inaccurate with the original design.

The music in the game quite catchy! It was one of my favorite soundtracks when I was younger. While there aren’t many tracks in the game due to how small it is, the music is still pretty good. There is no official soundtrack for the music.

All sound effects and music tracks can be listened to in-game with the sound test, which a code is given at the end of beating Extra Game.