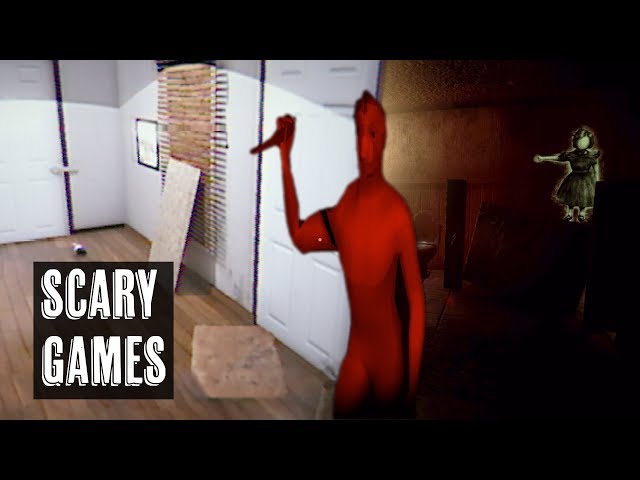 Summary: I play seven games for Halloween of 2018, including Dungeon Nightmare, EXIT, Hostage, September 1999, The Emulator, The Lunatic, and Baldi's Basics in Education and Learning.

I did a collection of seven spooky and weird games for Halloween 2018! I didn’t know much of anything about the games prior to the stream, so I was just going along with it. Some of these were actually pretty good, while others…not so much.

A simple horror dungeon crawler where you have a limited light source, and need to find lanterns, all while getting the key from monster and getting to the next floor. If the monster spots you, it will chase you.

The game has black and white pixelated graphics. And the background must is of an eerie piano.

The game can be played in browser and downloaded: https://linc7991.itch.io/dungeon-nightmare

A simple horror puzzle game. You control a character with a flashlight who needs to make an exit from the rooms by finding a key. I ended up getting stuck at one point. There were no jump scares or enemies from what I played.

The game looks like you are playing on an old Gameboy system, and it’s quite hard to see. There is a green tint and limited shadows and lights that make it even more difficult.

The game can be played in browser and downloaded: https://nukespoon.itch.io/exit

It can be downloaded here: https://pepaco.itch.io/hostage

A short experimental horror game. All you do is roam around and after some time, it transitions into the next day. After some days, you realize what is going on. The person is a serial killer. The body is on the bed, the windows are boarded up, and the chainsaw is going. After 5 minutes and 30 seconds, the game is over.

The graphic quality looks like it was taken from a VHS tape in 1999. It looks quite realistic. There isn’t much sound either.

It can be downloaded here: https://98demake.itch.io/september1999

It’s the night before Halloween, and a strange creature from the deep web called the Emulator is inside the house. The creature is all red, with a knife, and comes at you stabbing.

The atmosphere and music are eerie and make it feel like something is going to pop out at you any moment.

It was created in one week for a game jam. However, it was my least favorite of the bunch. I think largely because it was hard to move and I wasn’t able to run away from the monster well.

It can be downloaded here: https://t-allen-studios.itch.io/the-emulator

A little girl named Daisy guides us to various areas of an old abandoned building. The environment looks phenomenal and the lighting gives it a unique look. There is a constant ambient sound playing in the background. Although, it wasn’t scary at all.

It can be downloaded here: https://juicysweetyproduction.itch.io/the-lunatic

Baldi’s Basics in Education and Learning

Welcome to Baldi’s Basics in Education and Learning (that’s me). This is a kids game where you learn how to do math. But, if you answer incorrectly, Baldi gets mad and chases you with a ruler.

Collection seven notebooks will being chased by Baldi. Sound familiar? It’s essentially Slenderman in a school environment that looks like an educational 90s game.

This game became super popular! It can be downloaded here: https://mystman12.itch.io/baldis-basics