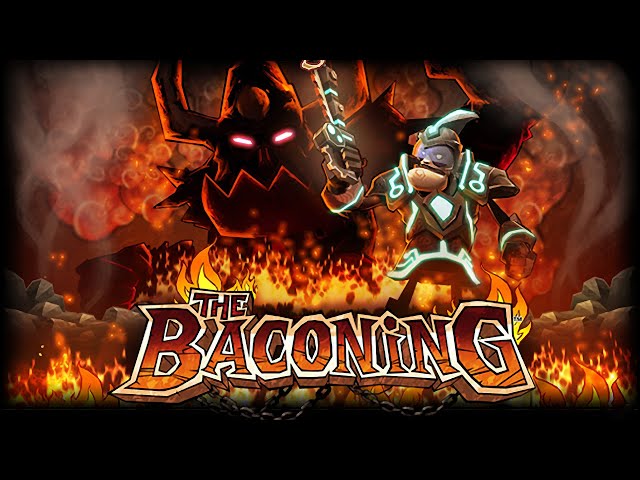 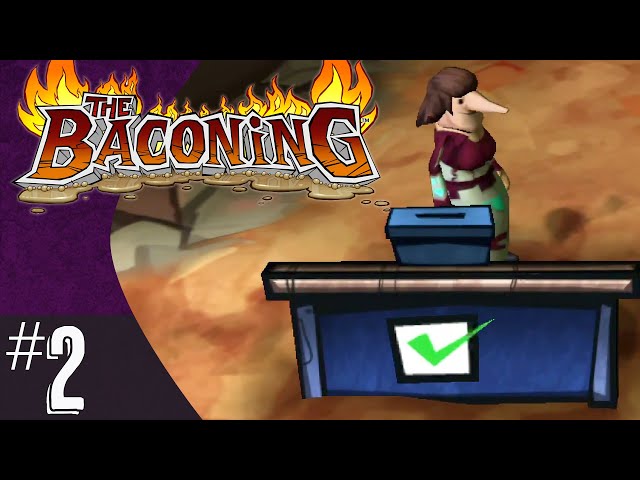 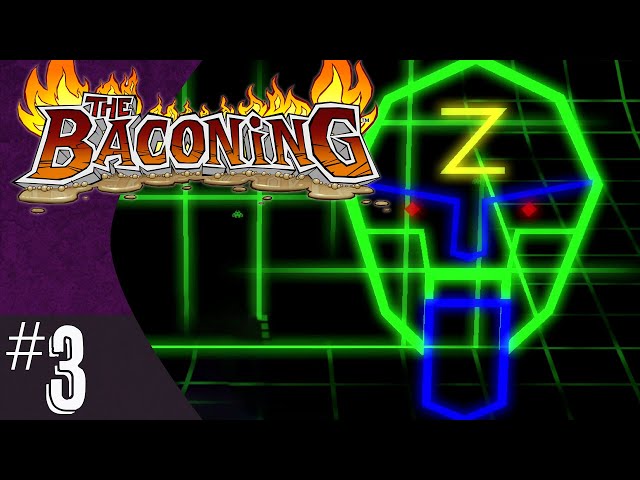 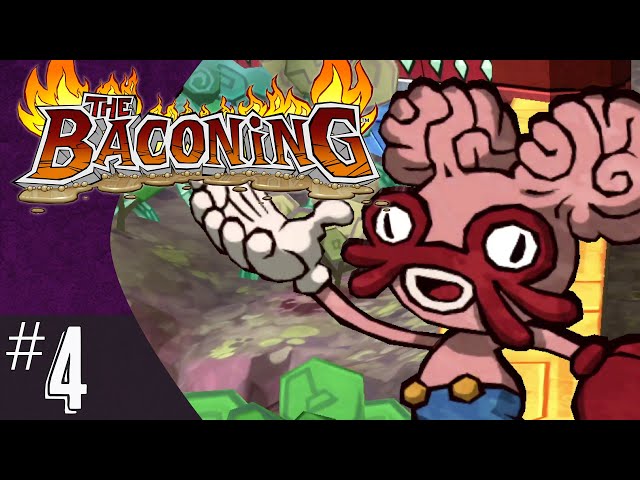 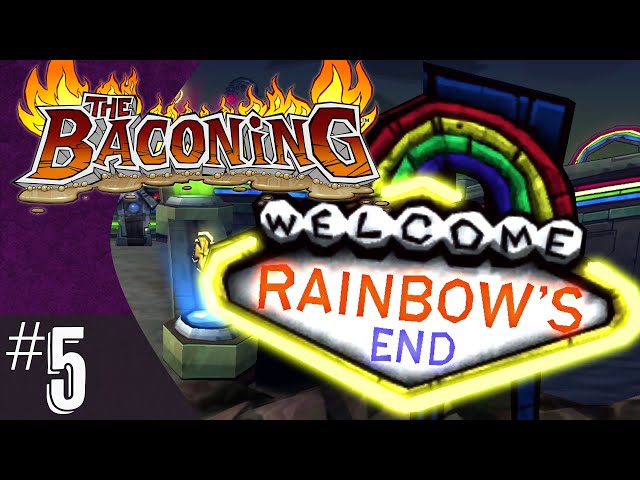 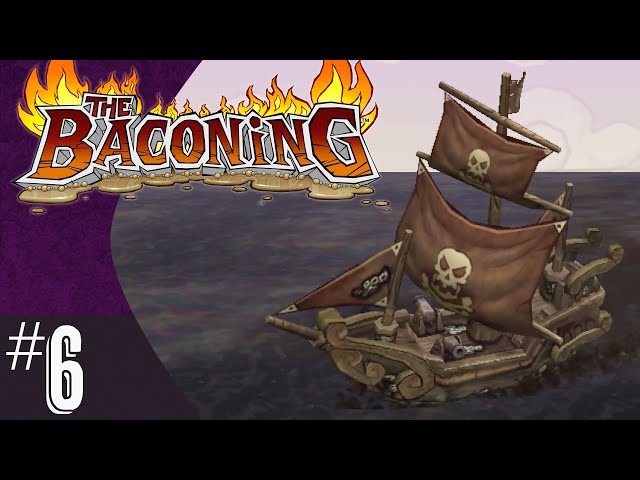 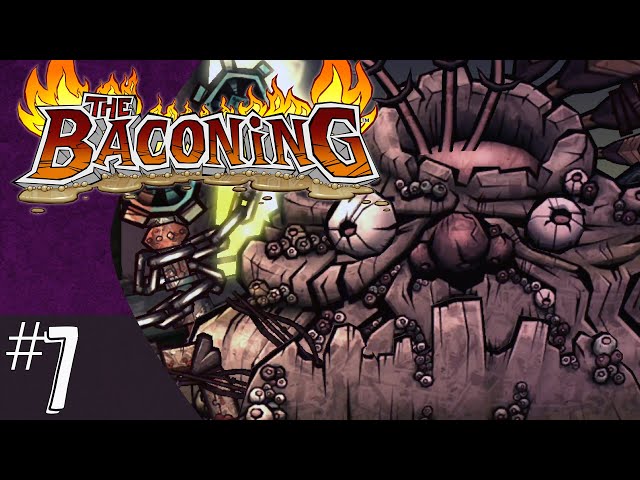 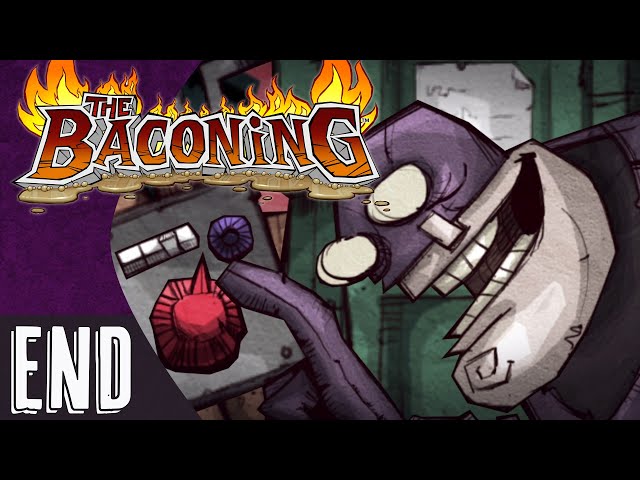 Summary: DeathSpank is bored, and sets out on a hilarious adventure to defeat the Anti-Spank.

This is the third and final DeathSpank game. It’s technically not considered a DeathSpank game, and the name “DeathSpank” doesn’t actually appear in the title of the game (but I’m putting it here for people to find the game easier). The first game is DeathSpank: Orphans of Justice, followed by the sequel, DeathSpank: Thongs of Virtue. The Baconing follows these two, but is not directly connected to the series.

I owned this game on the PS3, including the DLC character, Roesha. It’s a great, fun game much like the previous two, but not as good in my opinion. It seems much more closed off, and the map is even separated into areas and all quests are completed in that area before moving onto the next. Thus, it doesn’t feel as natural and open world.

Since the first two games cover the story of DeathSpank, it would seem like the natural ending for Thongs of Virtue would be the one where DeathSpank gives up his thong and surrenders to Sandy. This is why The Baconing would not be part of the series since it follows the other outcome, where DeathSpank defeats Sandy and keeps the thong. The Baconing follows the hero DeathSpank and his pursuit to defeat the Anti-Spank.

DeathSpank decided it was a good idea to wear all the thongs of virtue at once, which birthed an evil clone of himself, the Anti-Spank. He must travel to the bacon fires, burn the thongs, and defeat the Anti-Spank so Spanktopia is safe.

The first bacon fire is in the Forbidden Zone underneath Z.I.M.O.N.’s Citadel. Second is behind the Nuclear Family. Third is underneath Rainbow’s End casino. Fourth is behind Mother Barnacle. And the final one is beyond Valhalla Heights retirement community for Gods, specifically behind Hel’s Half Acre.

Upon doing all this, DeathSpank faces the Anti-Spank, and defeating him reveals his true evil mission…a time machine?! DeathSpank travels to the Past, 🎁, Future, and Steve in order to change history itself. To be continued…well not really since this is the final game in the series.

The gameplay is identical to the first two games, with various melee and ranged weapons that are swapped quickly for more powerful ones. The quests in the game are mostly contained in that part of the map, thus no need to travel the world to complete the main and side quests. Completing the main quest is important to advance the story to the next area. Each time you level up, you gain a new skill, such as increased damage, faster movement, and using weapons and armor earlier, plus some new ones that were not in the first two games, like powering up sidekicks. There is no reason to use armor and weapons earlier. Rather, focus on other, more important upgrades. Level 20 is the max in the game, much like the first one, while the second had a max level of 21.

There is also an arena where 20 challenges await, each harder than the previous. The reward is an amazing spinning justice weapon and tons of power up orbs.

At the very end of the game there appears to be DLC rooms, but no DLC was made for the game besides a character for the 2nd player.

The DLC, Roesha, is ok, but Bob from Marketing is much better for the 2nd player. He can eat and devour enemies for health, and go underground and is invulnerable.

The appearance is also identical to the previous games. Much of the game is 2D cut outs, with some 3D models placed about, which gives it a unique style. There are a few animated cutscenes, but there is no longer an option to turn on captions. Text is visible during text-box based dialogue scenes when talking with NPCs. The game has to be run at 1920 x 1080 or the text and HUD are very small.

You can never go wrong with DeathSpank’s amazing voice. It is absolutely hilarious. The music in the game is mostly the same as the previous, but has some new tracks. 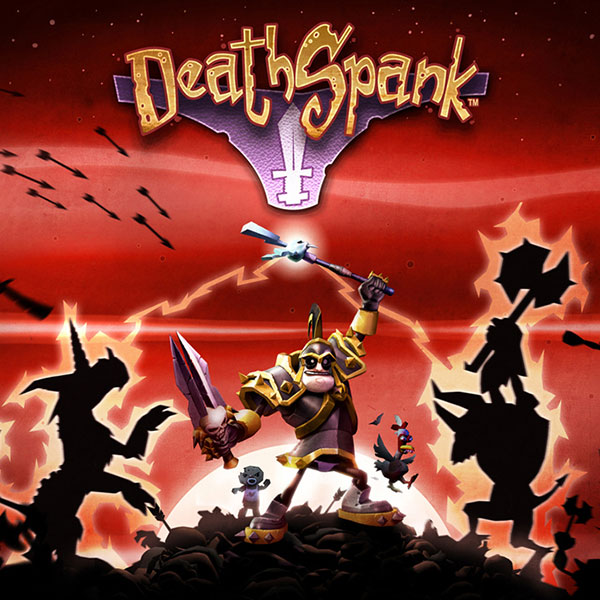