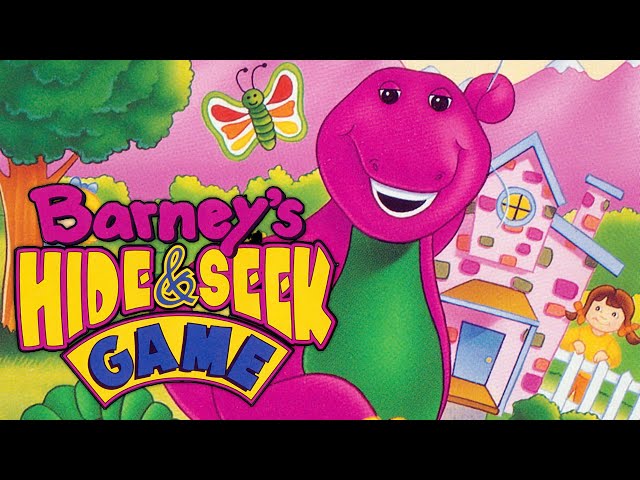 Summary: Barney loves playing hide and seek with his friends. Help him find them and presents to give them.

This was a game I had during my childhood. I have strong memories of playing it, not for fun, or that I even liked it, but because it was so bad and dumb. So, I thought it would be perfect bad gaming cringy material for my viewers.

Barney the Dinosaur loves to play hide and seek with his friends, which are children. So, he goes out searching for them and the hidden presents. When he finds them all, he celebrates with his friends and waves goodbye.

Control Barney, or don’t since the game actually features a self play mode where the game will beat itself when no buttons are being pressed, but he will not collect any friends or presents, nor interact with the environment.

If you are controlling Barney, simply move him left and right, jumping when needed to get to higher places, looking for friends which are half visible behind rocks and such, in addition to presents which can be out in the open. There are various environmental objects to interact with, such as on the first stage: helping a bunny get a carrot, hatching birds, and throwing away trash. Barney can also blow a kiss to show how much he loves you and kiss the various animals and critters in the environment.

Each stage has five children and five presents. You don’t have to collect any to complete the game. But, you get a little surprise at the end if you do, which is just some screen confetti. Moving to the end of the stage, when the screen stops autoscrolling, will advance the stage. So, be sure to collect those kids and presents before then!

Probably the only good thing about the game. The graphics are colorful and cheery, and everything is happy and smiling.

The music is very quiet and is mostly just kids songs, and there is actual voice acting by Barney. This is something you didn’t really have for Genesis games, but there is a voice and while it’s low fidelity, it’s easily understandable. Pretty impressed by that since voices in games were not a thing during this era.